PBIS: My philosophy toward preventing negative behaviors currently aligns with that of Positive Behavior Intervention and Support (PBIS). PBIS is a hybridized method of classroom management that mainly focuses on the idea of preventing problem behaviors before they develop, modeling appropriate conflict resolution techniques, and employing some aspects of behaviorism to reinforce expectations (Hardin 2011). In the figure below I have outlined the three categories of behavior prevention proposed by PBIS Model as described by Hardin (2011).

PeaceWalker: Because the PBIS model mainly focuses on prevention it has draw criticism for its lack of utility when it comes to dealing with behaviors when prevention fails. To compensate for this, I will integrate tools from the conflict resolution philosophy outlined by the PeaceWalker project in cases where problem behaviors still surface.

Additional notes: As shown in the figure below, I am assuming the majority of problem behaviors will be prevented by the "primary prevention" steps of PBIS, and that if they do fail the majority of students will respond to strategies suggested for dealing with "easy" people by the PeaceWalker program.
In the few cases where the initial preventative measures appear inadequate, PBIS offers suggestions under the titles "secondary" and "tertiary" prevention. Congruently, the PeaceWalker model holds that if strategies for working with "easy" people are not successful, I may need to rely on those for dealing with "difficult" or "sneaky" people (i.e. those who are not willing to comply with requests, or those who pretend to comply but then do not, respectively). 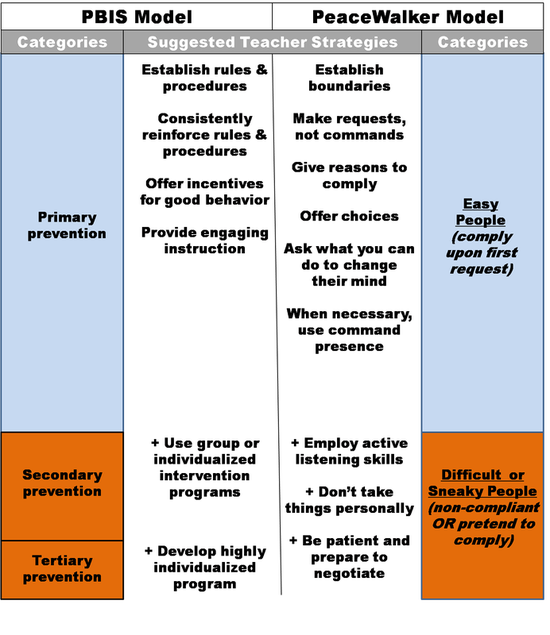